Every once in a while when I’m driving the XJ8 I like to turn off the AC and radio, roll down the windows, step on the gas and listen to it roar!  The sound it makes with the upgraded Mina Gallery exhaust is not overly obnoxious but it is just the right amount of growl for a family sedan with a bit of a wild side.  After all, this is a V8 motor that revs to right around 7000 RPM before it hits the redline which is one of the things I love about it.

Lately I’ve noticed when I get on the gas there is a bit of a knocking sound that comes from the engine when I first get on it.  Based on my knowledge I believe it sounds like valves or something chattering in there, they don’t seem as happy as they should be to be kicking up the rotations per minute.  I am a “Google Certified Mechanic” so of course I researched online to see if others had dealt with this.  First I wanted to know if it is normal, which I’m guessing it might be for a car with 121,000 miles on it but I also wanted to know if there was an easy solution or if it was going to cost a lot of money to get rid of the sound.  If the latter was the diagnosis then I would just have to live with it because otherwise the car is in good working order.

Based on my initial research this could just come from build up inside the motor and a product that everyone seemed to agree on was something called BG 44K fuel system cleaner.  I have never used this product myself but I have used several other brands of products through the years that claim to do the same but I was never able to really to tell if they did anything and I’d bet they really didn’t.  Because of the posts in that Jaguar forum and the reviews on Amazon it seemed like it was worth a shot to go ahead and buy this stuff to see if it would help.  I’ve ordered the 3 can pack with the funnel since one of the posts mentioned they had to use 2 cans with 3 or 4 tanks of gas to get rid of the clatter and will update this post with the results.

June 30, 2015 Update: I’ve ordered a microphone and extension cable to hopefully be able to get a good recording of the knocking sound before putting in the fuel system cleaner.  I’ve tried to get recordings from inside the car and it is just not happening.  At some point I will be investing in a GoPro setup so that I can have it for capturing things like this.

Here is my first attempt at recording the noise with a microphone in the engine bay.  I will probably try a couple of other recordings with the microphone in different locations just to see if it captures the clatter better but you can hear it in this audio when I first hit the throttle.  This thing sounds a lot meaner than I thought it would with the mic in the engine bay.  I took this recording from a rolling start from about 30 mph to 60 mph.

July 1, 2015 Update: I moved the microphone to another location and attempted to record the sound again. These audio recordings aren’t coming out as well as I’d like but I can hear the clatter noise. On this audio it sounds almost like a bit gravel being thrown about as I hit the gas but that sound is coming from the motor. Once again, I’m amazed by how this thing sounds recording it up close and personal in the engine bay. On this clip I took it to about 5000 RPM.

After taking this audio I filled up the tank with 100% 91 Octane fuel like we normally do and then put in one 11 oz. (325 ml) can of BG 44K fuel system cleaner. I will post some follow-up audio clips after this tank is gone to see if any improvement is heard. 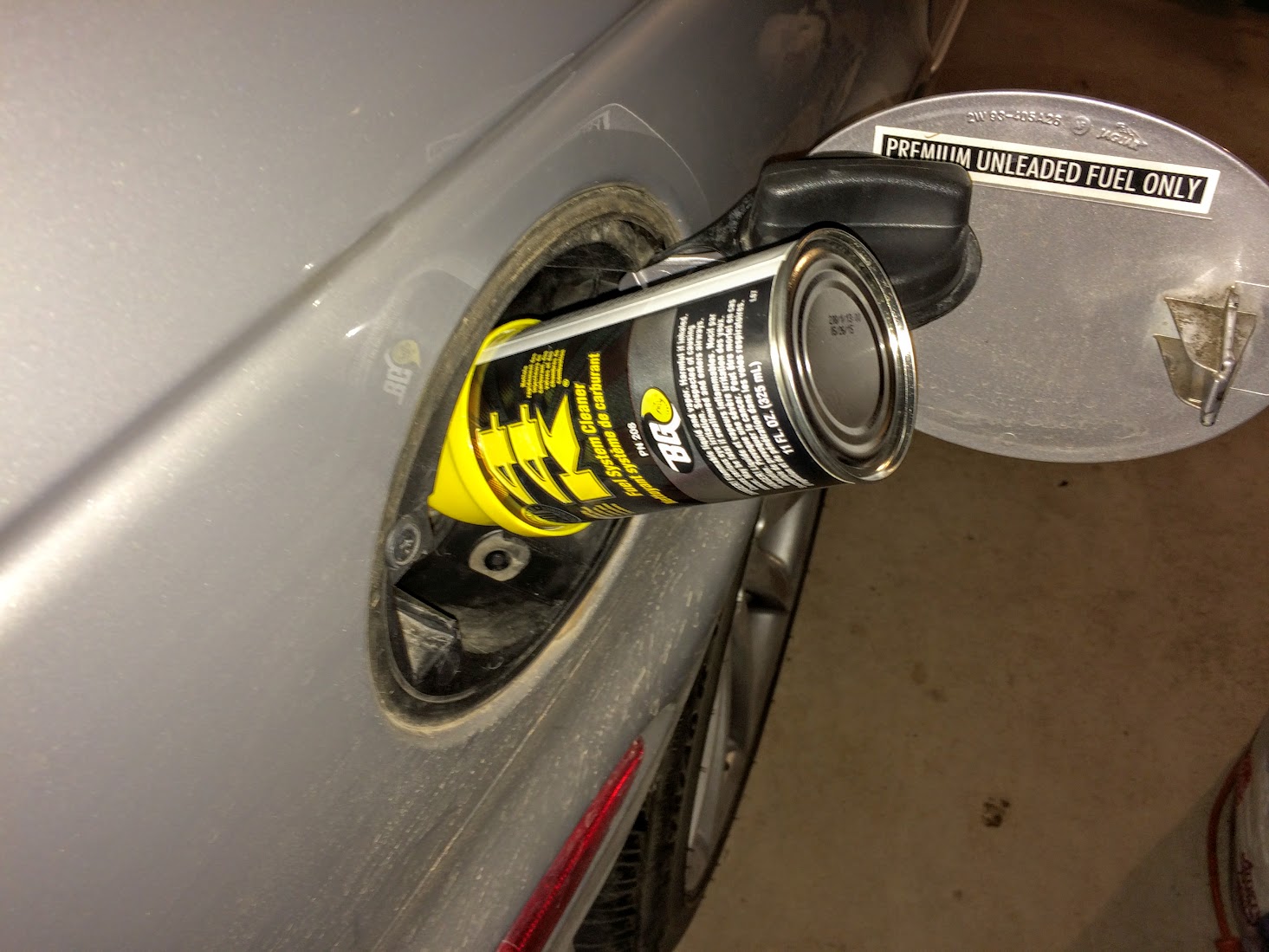 August 4, 2015 Update: I’m finally back to give the first round of updates on this “experiment”. I put in the BG 44K cleaner on July 1 after we filled up with gas and we’ve since gone through that tank and another untreated tank. The car had about 122,250 miles on it when I added the treatment and in the audio below it had around 122,950.

I put the microphone in the same place as location #2 above and did the test with the same amount of warm up and on the same spot in the road. I can still hear slight knocking in this first audio clip but it doesn’t seem as bad.

Here are a couple of more audio snips from the trip to the gas station that day.

I realize this is not scientific in any way but I can hear a difference and the car seems to feel a little stronger. I went ahead and added another can of BG44k to the latest tank and I will follow-up with more audio in a month or so once we’ve gone through this tank and the next untreated tank.

September 3, 2015 Update: Well, I’m back again with some new information. I can’t say definitively if the BG 44K cleaner makes a huge difference but I know it helped some after the initial tank. It seemed to me though that the knock under heavy acceleration started to get worse as time went on. I think this stuff probably helps things out more on some cars than others but in our case I think the issue was something completely different. I recently decided to fill the car up with 100% 93 octane fuel which is an upgrade over the 100% 91 octane that we normally use. One thing I can say for certain is that the higher octane fuel all but eliminated the knock under acceleration as you can hear.

I also noticed about a 2 MPG (10%) increase in fuel economy with the 93 octane. It’s hard to draw any concrete conclusions from that though since this has only been one tank and maybe more of this tank was highway driving, etc. One thing I believe though is that the 93 octane fuel is what this engine craves but since it is almost $1.25/gallon more than the 91 octane I likely won’t fill up with it all the time. It’s also worth noting that the gas station I got the 93 octane from is not where I usually get 91 octane from so I might also try their 91 just to see if it’s a higher quality.

The last recording that I did brings to mind some more research I need to do, if you notice at the 5 second mark I let off of the accelerator but the engine kept the revs up at about 4,000 RPM for another 5-6 seconds. I’ve noticed it does this most of the time when I get on the gas and then let off. I’m not sure if this is normal but you can bet that I will find out!

September 4, 2015 Update: I filled up the car yesterday with 91 octane from the place I’ve gotten it lately. As expected the knock under heavy acceleration is back. I’m going to take this opportunity to try another fuel additive that I’ve read a lot about but have never tried. Lucas Oil Octane Booster is reputed to be a great option to help boost the octane in lower rated fuels. Normally I wouldn’t be able to really tell if something like this works but I will know right away if it helps by listening for the knock. 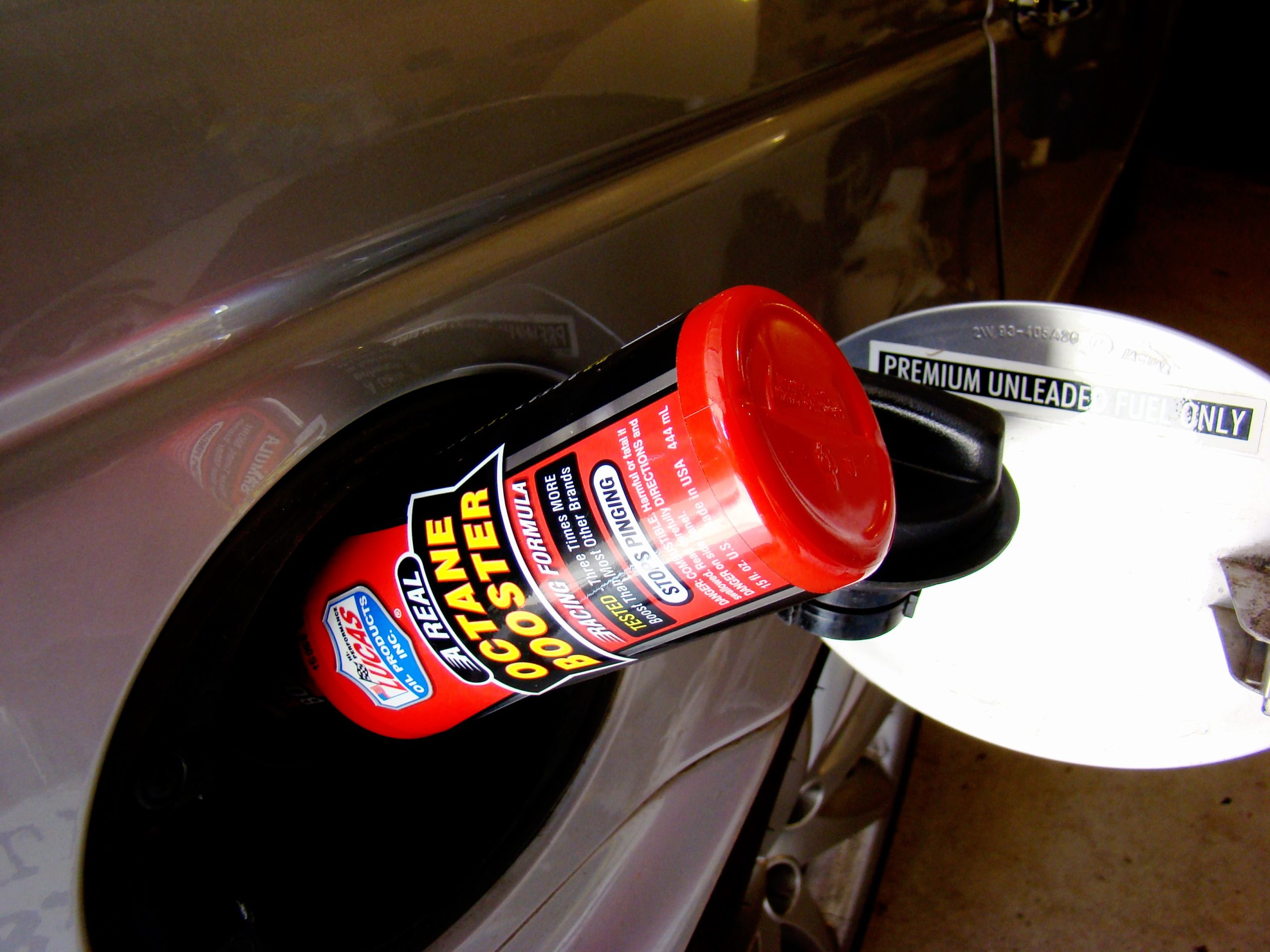 September 10, 2015 Update: I purchased the Lucas Oil Octane Booster and put it in the tank of 91 octane fuel that I mentioned from my previous update. Lucas recommends to put the additive in first then fill the tank but since our tank was already full I just poured it in on top and shook the car around to mix it up 🙂 not really, but I did abruptly hit the brakes a few times while backing out of the garage to splash it around a bit! I have just finished off this tank and I can say that the Lucas product did help with the knock that I was hearing. Once again, this is not scientific in any way but I did several runs before adding the stuff and have done several since and the engine knock is significantly less but not completely gone.

With this, I conclude that 93 octane is best for this car and any high performance engine. If you can’t get 93 octane or don’t want to pay the premium for it then Lucas Oil Octane booster does seem to increase the octane.