We purchased our 2005 Jaguar XJ8 a little over a year ago. When we got it home I started to notice a squeaking sound when we’d first start the car in the morning. The sound went away after the car was running for a bit but it certainly was not ideal. I did some research and from what I found it was a normal sound for these cars and it was caused by an idler pulley that allowed the belt to move back and forth on it. In these posts there was mention of an upgraded pulley but I never could track down the exact part number. We lived with it for about 9 more months until I made it much worse after washing down the front of the engine trying to clean up coolant from a faulty overflow reservoir. After the cleaning it would squeak badly at all times and never really go away. It is hard to be cool when you are cruising around in a squeaky car, even if it’s a Jaaag!

I ended up tracking down the part that I thought would work by looking at options on Amazon, I eventually found one that claimed to be compatible with a 2005 XJ8 (but not a Vanden Plas, go figure).  As you can see, the Gates pulley has a lip on the edges to prevent the belt from going from side to side unlike the OEM pulley. 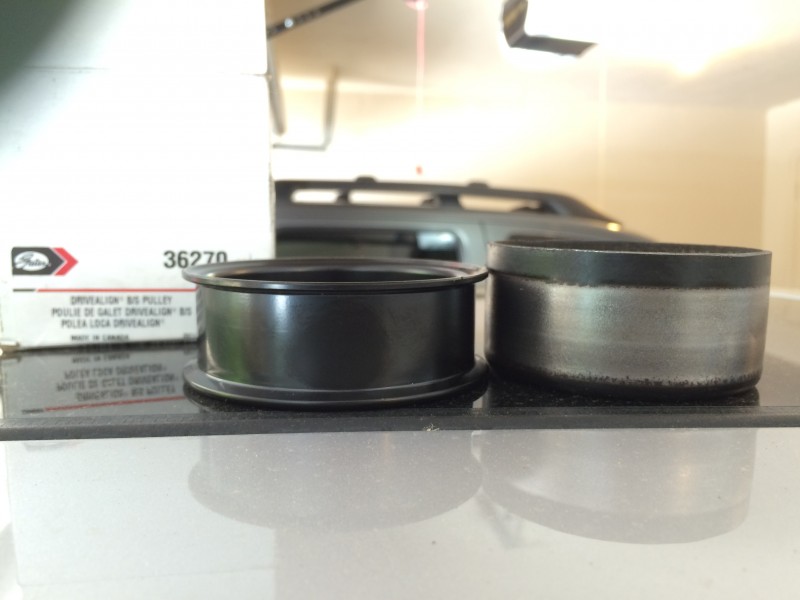 After replacing the pulley the car is as quiet as it has ever been and there is no more annoying squeaking sound.

I thought that I took more pictures back when I was doing this and took better notes but I need to do some digging to find them.  I went ahead and replaced the belt at the same time.  I will come back to update this post with details, tools I used and more photos.

Treating surface rust on your subframe